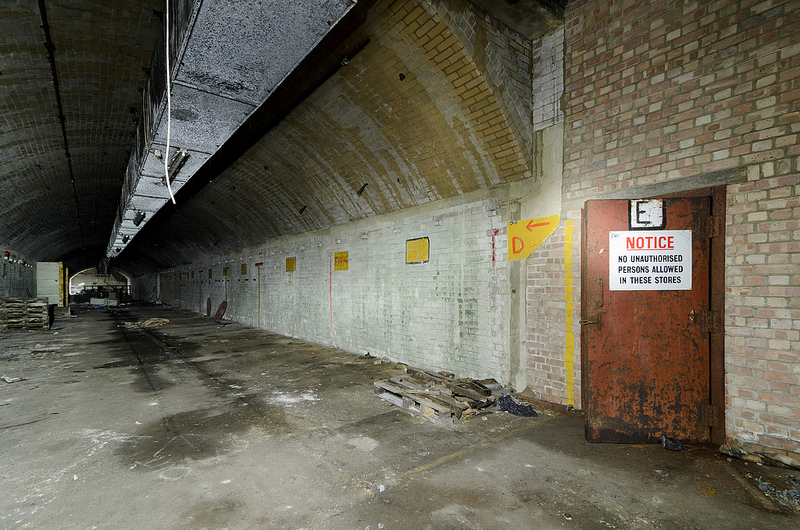 Revisits –  they are like watching a really good movie, you notice more.

Over the years we have been exploring we have found that the second time we visit a site, the more we discover.  The first visit is normally filled with a sense of wonderment, slight bewilderment and excitement – we power on through to cover as much as possible in the time. This leads us to spending little time on the photographs and details and whilst we return home feeling triumphant, we normally want more. Over the weekend we were lucky enough to pay the Shorts Brothers Underground Factory in Rochester a second visit.

Shorts Tunnel was one of the first sites we ever visited after we had been unceremoniously kicked out of Pyestock.  Being poor students and new to the hobby, we turned up with a point & shoot camera, tiny tripod and a double-AA Maglite. Our visit was with a much larger group and on looking back at our photos, they could have been better.  Years later, we fancied a revisit and like many sites Shorts Tunnels swings between being buttoned up tightly to access all areas. Returning to take better photos was a not an option. Over the years, there have been a number of sites like this.  We ignored a revisit to St Ebbas until after it was demolished because West Park overshadowed it.  Pyestock was struck from the list, Denbigh Asylum was partially burnt down and numerous others have been demolished.  When we look at some of the older photos, they makes us want more even though we know we can never revisit them.

Out visit to Shorts had been organised by Underground Kent and about 20 people attended.  Our guide very stated very clearly at the beginning “If you don’t want the tour, you can break away, just be back at the Entrance by 14:00”.  After a slight fumble and cracked head, we made our way down to the factory areas as quickly as possible.  We wanted clear light and decided to avoid the crowd.  The biggest problem with large group explores is that non-photographers have an amazing habit of stepping in the way of the camera, mid-shot. A guide also cuts out half of the fun and discovery. It is strange coming back to somewhere after so many years, we found that some parts had hardly changed, whilst others were unrecognisable.  A fire in recent years had ripped through an old paper store, decimating the area around it. Yet the attached air raid shelter had barely changed, other than a few items growing legs and moving around the place.

As we had decided to break away from the main group and explore on our own, this trip meant we came across hidden items we had previously not seen.  We managed to find a few cracking items, such as recessed first aid boxes, old graffiti and a couple of microfiche slides showing Blaw-Nox plans. Revisiting and taking the time to look at parts we had not seen before made for an enjoyable day.

Revisits, they are something every explorer should do.  Lets face it, there is always a photograph you want to recompose and try again with.