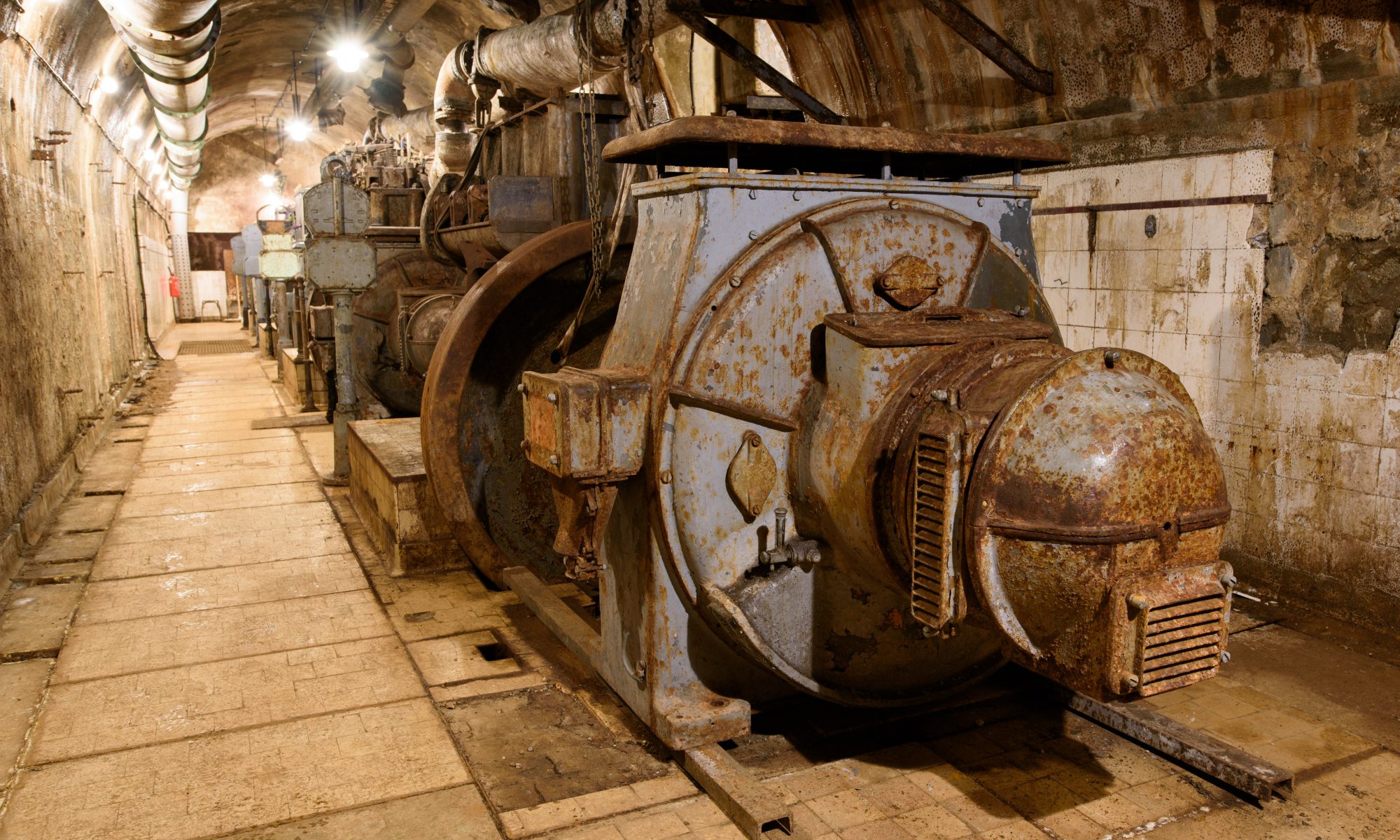 It started on a cold December morning at 6am, the car was loaded and the destination programmed into the navigation system. All being well, we were ready to head off to Europe for a weekend of blasting around the French country side looking at defunct military buildings.

At least, that was the excuse. Having barely got a mile down the road something had gone wrong. It was in the mind-fog of our early start did we discover the ineptitude of the navigator (ahem, me), and found ourselves heading into London and around the M25, and not down the M20 towards Le Chunnel. Bugger. Put me in a drivers seat and I can get you to within an inch of where you need to go; put me in a passenger seat and ask me to navigate and people realise I was lurking behind the door when the navigational skills and attention spans were handed out. Our trip to France had not started well, hopes of making an earlier train unfortunately dashed by a fucking halfwit. Things didn’t improve on the other side either when the Sat-Nav decided it was more efficient to route us through Belgium, Luxembourg and Germany before finally arriving back in France just outside of Metz. We didn’t need to go through Germany, but it is always nice to unexpectedly clock up five snowy countries in a couple of hours and avoid the militant French police whilst hammering along at a reasonable pace. The one thing we did learn on this detour is that the Ardennes area is rather pretty and a visit in the future is required. After my brain fart at 5am, the proceeding car journeys saw me consigned to the back seat and navigation duties being passed on to a far more responsible and attentive person.

On a normal day, a plan can come together extraordinarily fast for us and concludes before it has barely even started. Other times, a fleeting chat over a beer can lead us down a winding path that ends a year later, exploring the French Maginot Line and Germanic fortifications around Metz. Being British, we could not possibly have appreciated the scale of the border fortifications built by the French along the Maginot Line, or the German fortifications around Metz, without visiting them. Our Country sits in ‘splendid isolation’ just across the English Channel nee Moat, which has kept out invading land armies for as long as our history books can remember, except for that time the French and Dutch got lucky! All in all, this has negated the need for hugely complex line of defensive installations that sprawl across hundreds of miles of shared border – we spent our money on vast Naval project instead (It was easier to harass The Empire with a fleet of ships). However, the United Kingdom doesn’t entirely lack in large scale fortifications, areas such as Dover and Portsmouth were heavily fortified by the Victorians over fears of a French invasion. But, these structures are toys compared to those on the continent. For starters they are not big enough to include their own internal railway, or underground accommodation for one thousands fighting troops, or have popup gun turrets (cool!!).

For those of you that weren’t paying attention in history at school, or haven’t already opened a new tab for some quick wiki research, the Maginot Line was an enormous defensive system built by the French in the 1930’s to defend against possible invasion by the German Army. France had seen the world bloodiest and deadliest war fought along this same border some two decades earlier and did not want to experience it again. The Maginot Line was intended to stall the German Army for long enough to allow the French Army to mobilise and rush to the border and mount a strong defense. Complicated politics meant that they did not fortify the Belgium border,  which unfortunately left the side gate open for German flanking maneuvers and the rest is history. Metz was annexed and fortified by the Germans after the Franco-Prussian war in the late 19th century to prevent the French retaking it, only to have it, and the forts they built,  handed back to the French after World War 1. World War 2 saw the forts back in German hands after their invasion of France and they proved their worth by stalling the Allied Armies on their advance into Germany.

What explorer would not want to pay these forts a visit?  The reason for their construction might be on the grim side of the scale, but everyone likes a bit of James Bond and the fanciful bunkers that he swanned about in. Unless you are prepared to risk it all for exploring some high profile sites in the UK, we currently lack large all day explores and road trips covering numerous sites are now the norm. We were looking forward to having a one to two sites a day to wander in. Our plan involved exploring a mix of the French Maginot Line Gros Ouvrages of the Thionville Fortified Sector and the German fortifications encircling Metz. The area has rich pickings (we’ll go back at some point), but our weekend saw us visit the following sites:

France also taught us one other thing – the British really do fail when it comes to winter. Give us 0.5 inches of snow and the entire country seems to grind to a halt; the rest of Europe seems wrap up a little more, shrugs and carries on regardless. We adopted the European approach, which isn’t very much as the local authorities are very efficient in clearing and gritting the roads. Besides we were in a Quattro. Not much stopped us…..

The snow had the added bonus of making the area superbly photogenic.

Rochenvillers. Gros Ouvrage Rochenvillers. Gros Ouvrage ‘I am bloody bored of walking this really long burnt out tunnel’ Rochenvillers. Nothing had prepared us for the scale of this place. It was huge. Someone should open up a bar halfway between the accommodation block and the fighting blocks to serve refreshments to the intrepid explorer or metal thief. We exaggerate, but Rochenvillers is one of the largest Gros Ouvrages along the Maginot Line and boasts a near 2 mile long tunnel and nine underground fighting blocks. Unfortunately, miscreants found there way into the tunnel network a number of years ago to steal valuable metals and caused untold amounts of smoke damage in the process. Soot lined tunnels suck up torch light to no end. Some surface photographs can be found here.

Brehain. Another Gros Ouvrage. The tunnel wasn’t so long in this one, thank god, or it would have gotten very boring. Brehain was another one that was refurbished during the Cold War, along with Rochonvillers, Molvange and later Immerhof, to form a defensive strongpoint against rampaging Soviet hordes. There is also evidence inside of German use in the Second World War. We went in the snow, which added to the atmosphere. It was bitingly cold though.

Billed as “the smaller one” of the trip, but still went on for a mile underground. We were lucky to visit Gros Ouvrage Michelsberg at this time of year as it is normally closed to the public. Thankfully the owners very kindly agreed to open it up out of season for us fellow bunker perverts to snoop about their fantastic restoration – they even provided us with a breakfast. If you are in the area, do try and drop by and have a look, it is a brilliant tunnel complex with restored parts and to-be-restored parts filled with equipment from the 1930s. Lovely. Why can’t there be more places like this?

Murals. Nearly every military installation we have visited has had some sort of painted mural, drawing or carved graffiti from bored soldiers on a wall somewhere and we doubt we will ever get tired of finding them. L’Yser had some of the best and most intricate ones that we have come across in our years of exploring; incredibly they have thus far been unmolested by idiots with spray cans. Unfortunately, some had had there faces scratched out, but this was only in one or two places, odd! Whilst L’Ysers did not cover the same length underground, the site was extensive and was made up of multiple fighting blocks interconnected by tunnels, ditches, barbed wire entanglements and dense undergrowth that made for a lot of walking.

Our second German fortification of the day; Verdun consists of two forts that are situated close enough together to be considered a single fortification that guards the area. Both forts suffered extensive battle damage when the Americans bombed the crap out of it in 1944 during Patton’s attempted to dislodge an entrenched German Army. The extent of the damage was obvious, fractured concrete, tumble down bricks and gaping holes littered both forts. Marvellous.

This one we knew nothing about, not even if it was ‘visitable.  We rocked up, chanced our arm and found a slightly awkward way in. Group Fortifie Francois-de-Guise was re-purposed during the Cold War into an aircraft control centre for the French Air Force. Nicely decayed inside and untouched. However, it smelt of dead rabbits.

We must go back, Europe was fun! And now for some photos: