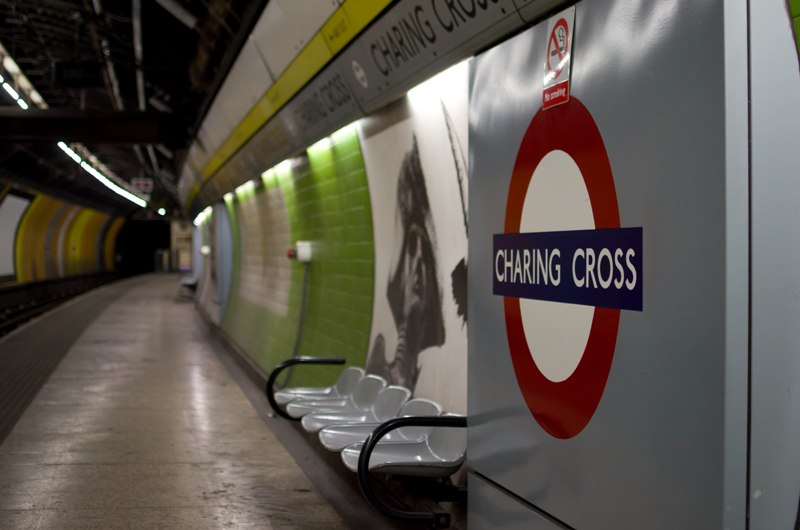 It has been a while since we have posted anything to the website, or explored the crumbling buildings we love.  A week in the mountains enjoying some fine white European powder in the Alps, Christmas and a house move have meant that life caught up with us and stood in the way.

As is the way with out exploring, this all changed very rapidly.  Out of the blue, and old explorer dropped us a message via Facebook. It simply said “I have arranged a tour of the non-public areas of Charing Cross, want to tag along?”

Well, yes.  Yes we did.  The old abandoned stations of the Tube have long since fascinated us.  But the thought of running the tunnels, dropping down air shafts and facing the horrendous outcome if caught has always stopped us doing anything other than taking the official route.  Which is slow, arduous and often ends up with a telephone being slammed down and any prospective tour being swept into the bin.  This is partly why we have an affliction to casual trespass.  But we have our limits and there are some places that we just will not go.  And as the UK scene has evolved, our motivation has dwindled some what.

Anyway, this wasn’t this post was meant to be about.  This was meant to be about Charing Cross, somewhere I only ever expected to see if the points just south of Green Park failed and sent us the wrong direction.  Our day started by meeting up within the main line station.  Explorers are an easily identifiable bunch, normally seen wearing old clothes, heavy boots, back packs and an expression that views the world as a suspicious open playground.  Our group looked exactly the same.  Once everyone had arrived, eaten a hastily brought breakfast, we set of to meet the Station Manager.  After a very brief H&S talk (it couldn’t be avoided) that told us very quickly not to smoke or fall on the tracks, we set off.  The Station Manager also told us that he would prefer to show a few people around, rather than find CCTV footage of unknowns strolling his closed off platform areas. Bonus.

Charing Cross Underground station has a complex history and has existed under a number of guises as The Strand, Trafalger Square and finally, Charing Cross.  At present the Northern and Bakerloo lines both serve the station, but there was a third line.  Unseen by the public, a set of disused Jubilee line platforms lay hidden behind a set of doors at the bottom of the main escalators.  This is were we spent the majority of our tour, poking around above and below the Jubilee line areas. We also spent a little bit of time spotting where the latest Bond blockbuster Skyfall had been filmed.  Apparently, the production team spent 5 months on site, for a 10 minute snippet of film! Time well spent in our opinion.

After we had finished with the closed areas, our guide explained that he would now take us into the closed areas and lift shafts around the Bakerloo line, the old construction tunnels and various parts of the ventilation system. We hadn’t been expecting that. The old Bakerloo lift shafts had been capped and filled with ventilation equipment when the Trafalgar Square and Strand stations were knocked into one. It is a strange feeling walking into a plantroom that is fancily decorated with green and white tiles and adorned with wooden fittings. It was great to see something off the beaten path, especially as the normal LU traveller doesn’t appreciate the importance of these systems.

It was also fun watching the raised eyebrows of Londoners as we disappeared in and out of various doors, and as we spooked them from behind vent grilles.

It was here we had to make our exit, and as we emerged above ground the group dispersed in the hunt for food/beer.