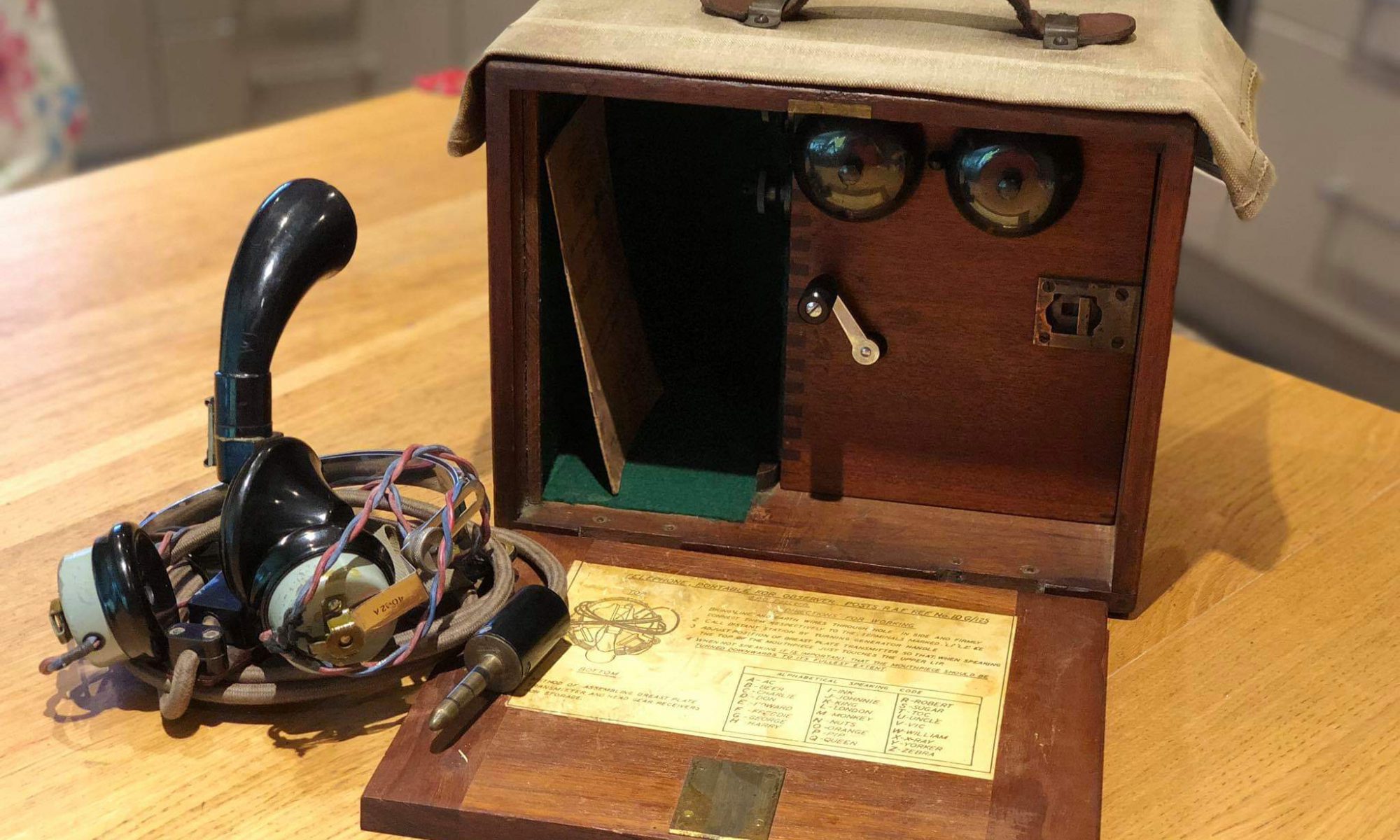 Recently, on the Cuckfield ROC Post page we posted photos of our Wartime Post Telephone after it had received a light restoration.  During this restoration, and the restoration of a friends Post Telephone (Al at Portadown Post) it was noticed that various marks and stamps were present on the wood and that 2 of the phones were numbered slightly differently. This peaked our curiosity, as we had just ‘assumed’ that a post phone was a post phone. There are clearly variations so we set about trying to work out what was going on….Now it is worth mentioning that We aren’t looking at these in strict chronological order, but rather with the most commonly recognised ones that are confirmed as Observer Corps issue first then, a couple of anomalies that we can’t quite work out….

First we will talk about the post telephone that we are going to refer to as the ‘early phone’ – model number AD163. We have seen several of these telephones now over the years and noticed that there are AD163, AD163B and AD163C variants – however the wiring diagrams were all the same so we didn’t know what the model number variation meant. We also noticed that there were marks stamped on them – we have seen FH38, FH39, FH40 and FB40 but had no idea what this meant.

This model of phone has photographic evidence of use before the war – there is a photo of ‘Welwyn Garden City’ Post in which the Observers can be seen using the Heath Robinson (pre-Pullin) Pantograph Post Instrument and wearing civilian clothes with no insignia or armbands – this dates the photo to pre-war, or very early war, so proves that this model of phone was in use at that time.

What does the B and C mean then? And what about the FH? Well some great research by Al at Portadown ROC Post Museum has cracked it!

So FH40 would mean this particular phone was made in the GPO Factory, Holloway in 1940. The Phonetic alphabet inside the phone corroborates this aswell, as it is of a specific type that was in use by the British during 1940 (again great fact finding by Al!)

Now, we are going to look at the ‘later’ post telephone – model AD1542 – which we will refer to from now on as the ‘wartime economy phone’.

Wartime economy was a tactic of government during WW2 to simplify factory production to improve speed of output, and to save material by using cheaper /inferior woods and metals etc. in order to save material that was in short supply for the war effort. The wartime economy phone has a slightly simplified circuitry compared to the AD163, but it is essentially the same internally, just powered by different batteries. The construction is vastly different though. For a start it is smaller, and is made of pine that has then been painted light blue. The wood is not nicely finished, and has a rough texture. There are no nice joints, rather it is crudely constructed using butt joints and nails. The metal hardware is also far simplified, there is no nicely finished metal locking cover over the headphone jack point – just a simple metal disc screwed directly into the wood. The hinges and catch on the door are also crude (but effective). The internal mechanism is held in place by a screw rather than a machined sliding bolt and there is no stamped name plate, instead it is simply stencilled with the designations.

We have found one phone with a date on it of ‘FB43/1’ which signifies it was made in 1943, during production run 1 at the GPO factory in Birmingham. The phonetic alphabet label inside was also a clue as it was of the format that was in use after 1942, whereas the AD163 ‘early’ phones have phonetic alphabet labels that were of the format used from 1921-1942.
There is also photographic evidence of the AD1542 ‘wartime economy’ phone being used in the underground protected posts – so it is safe to assume it was used after the war, and probably up to the introduction of the AD3460 ‘teletalk’ that was designed specifically for the underground monitoring posts in the nuclear age.

See the photos for details of the AD1542 ‘wartime economy model’ post telephone.

Now we move onto a couple of anomalies, first is the AD599 ‘DC Signalling’ telephone – photos of which were sent to us by Frank at Skelmorlie ROC Post Museum. This phone is of the era, and indeed this one has a date inside of 1940. It also looks externally the same as the AD163, but, and this is a big but, it is VERY different inside. So different infact that we can’t be certain it was ever ROC issue. For a start ‘DC Signalling’ would only be used over a short distance and direct from one phone to another phone. For example, an artillery forward observer would use a ‘DC signalling’ phone to communicate with the soldiers at the artillery gun a short distance away – basically a ‘2’ phone system. AC signalling, however, was used to communicate over much longer distances between multiple phones in multiple locations via a telephone exchange. The AD163 ‘early’ phone, and the AD1542 ‘wartime economy phone’ are AC signalling and were used via an exchange. Mike of Abernyte Post Museum has done some great research on ‘DC Signalling’ and field telephone systems and has helped us a lot with unpicking this anomaly of a phone.

Unless there was a specific Observer Corps post use for a DC signalling phone, that we are yet to discover, we can’t definitively say that this was an OC phone. That fact, coupled with the fact it has a very different wiring diagram labelled ‘Observer Telephone’, doesn’t mention ‘Observer Posts’ specifically, and has no RAF reference number (10G/125) all point to it being used as by another organisation other than the ROC – possibly the Army Observers (searchlight positions, Anti-Aircraft gun batteries etc.). It is also interesting to note that this phone has a ‘drop flag indicator’ function to enable a visual indication of the phone ringing – the wiring diagram shows that this operated with the bell when the phone is rung. This type of ‘drop flag indicator’ was used when a phone was in a noisy environment where the bell couldn’t easily be heard by the operator, for example during when a gun battery was firing. Due to the ‘DC Signalling’ aspect and the ‘drop flag indicator’ – we can’t actually say that this phone was ROC issue but if anyone has any further information or theories we would love to hear it, whether it proves an ROC connection or not. It is certainly an interesting item either way, and a potential part of the puzzle!

Mike of Abernyte Post Museum has done some great research on ‘DC Signalling’ and field telephone systems and has helped us a lot with unpicking this anomaly of a phone.

So, we thought we had the Post Telephone variants wrapped up, until Al realised that a Post telephone he had in storage at Ulster Aviation Society was different again. This phone was the same size and design as the ‘early’ post telephone, and had the same wiring diagram inside (marked AD163). However, it has a number of features of the ‘wartime economy’ telephone – primarily it was made of painted pine, but nicely finger jointed rather than crudely nailed together, yet it had the economy door catches and hardware. We haven’t yet found any marks on this phone to date it but we have surmised that it is possibly an AD163 to AD1542 transition phone, as part of the ‘economising’ for the war effort.

It is possible it dates from after 1940 but pre-1943. We have decided to call it the ‘hybrid’ phone. Perhaps it was a prototype, or a trial telephone, perhaps it was a sample of how to economise, or perhaps it wasn’t ‘economised’ enough so the powers that be pushed the economising further in the shape of the AD1542? Or perhaps it was simply an unintentional variant! Unfortunately, this phone is lacking its internals and is fairly (ab)used on the outside so most of the marks are unreadable. The only mark we can find is ‘M’ 212 – but we have no idea what that means.

If you own a post telephone and have different markings to the ones we have discussed, please do send us details as it would be great to work out more about the manufacture, design and use of these niche telephones, that undoubtedly saw action in the Battle of Britain and beyond. Whether they were Corps issued or not!